These days, organizations want to make sure they’re getting publicity for the right reasons, not for their ethical lapses. Just ask Volkswagen and Uber. Volkswagen was caught lying to customers and regulators about the performance of its diesel engines, even going so far as to program its cars to give misleading emissions information. In 2017, details emerged about Uber’s Project Greyball, a systematic, coordinated effort to evade law enforcement officials where the ride-hailing service was banned.

Volkswagen and Uber made a tricky choice. Both companies favored a profitable choice despite the consequences of their actions. This train of consequence trails back to ethics, which provides standardized questions that help us decide how we should act in different situations based on their effect. In practice, we make ethical decisions all the time and must justify our reasoning behind them. Oftentimes, ethical issues in business can be confused with other ways of making choices that can include religion and law.

According to the Markkula Center for Applied Ethics, ethics is based on standards of right and wrong that dictate what humans should do, usually in terms of “rights, obligations, benefits to society, fairness, or specific virtues.”

Ethics is not the same as religion, feelings, following the law or societal expectations. Rather, ethics encompasses:

To makes sure you don’t end up in the same boat at Volkswagen and Uber, your organization needs to adopt guidelines that promote ethical decision making and make ethics a priority for all employees.

One of the best-known ethical frameworks is also one of the simplest. The framework, developed by Ken Blanchard and Norman Vincent Peale, consists of three questions, as described below. The questions first appeared in their 1988 book, “The Power of Ethical Management.” 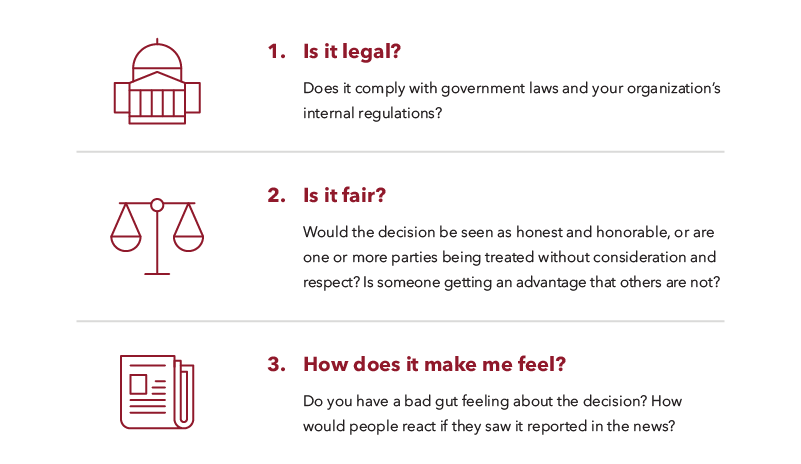 The Markkula Center identifies five approaches, or dimensions, that can be applied when dealing with an ethical issue. These sources can be used to evaluate decisions for many situations.

Once you have a firm understanding of these five sources, there is a clear set of progressive steps to consider in making an ethical decision:

Ask yourself, “What have I learned from this experience?” This reflection will help you make ethical decisions in the future.

In 1991, Thomas M. Jones, a professor at the University of Washington, criticized many of the existing models of ethical decision making at the time. He devised a new model that improved on previous efforts by introducing a variable called moral intensity and basing his research on social psychology.

Moral intensity considers several components: magnitude of consequences, social consensus, probability of effect, temporal immediacy and concentration of effect. Jones writes that two people, faced with the same ethical decision, might rightly come to different decisions because of these components. In effect, not all decisions are the same — a company introducing a dangerous new project has greater moral intensity than a decision to leave someone’s name off a group project. Both are unethical decisions, but one has a greater impact than the other.

All the dimensions of moral intensity must be considered at every step in the process, as well as organizational influences on decision making, group dynamics, authority structures and idea socialization. Decision makers must also be able to recognize their own biases when it comes to gauging moral intensity.

While the Issue-Contingent Model is old and somewhat complex, it’s a useful alternative for decision makers facing an ethical quandary in adaptable situations.

Why Ethics are Central to Leadership