Have you stumbled upon announcements about screening programs for blood pressure or posters advocating to eat healthy? Wonder about the intentions behind them? They’re examples of health promotion, a systematic model that dives deep into the behaviors people have regarding their health.

What is a Health Promotion Model?

Health promotion is known as the process of encouraging people to make healthy choices and motivating them to be consistent with their intentions based on theories related to human behavior.
Health promotion is generally implemented through strategies like patient education and counseling. In the healthcare field, case coordinators, medical administrators and other professionals can implement these approaches depending on the cases they handle. Healthcare professionals might consider one or many of the five health promotion models below.

The 5 Approaches to Health Promotion

Pender’s Health Promotion Model is based on the idea that people’s experiences affect their health outcomes. Health promotion models are focused on the behavior of specific knowledge and individual experiences. According to the theory, one would have to look at people’s lifestyles, psychological health, and social and cultural environment to understand most of their health-related decisions. For example, not eating fresh vegetables because one grew up not consuming produce is a way of understanding why someone may suffer from a severe condition like obesity.

The Health Belief Model theory suggests that a person’s belief of a diagnosed illness combined with their view of a treatment’s effectiveness predicts their likelihood of adopting a change. If someone suffers from an illness that is hard to diagnose, they might find it harder to prioritize treatment for the cause.

Based on this idea, health practitioners might take immediate action of telling someone that they’re either susceptible or have a serious medical condition. Moreover, they might expect a person to question the medical approach if they don’t feel the symptoms and show apprehension toward medical advice.

What follows this initial outcome might be an informed recommendation of the risk factors that can worsen illness. In more severe cases of non-compliance, healthcare leaders must develop strategies based on the HBM.

Sometimes when a healthcare professional informs a patient about a potential medical condition and educates them about preventive measures, the person may believe them but avoid immediate action. This choice is based on the idea that when someone receives information about their health, they might think about it before acting on it. Because of such behavior, the transtheoretical theory outlines six stages that someone might go through:

Although it’s not a model, this theory is highly credited under the HBM and is considered separate. The theory assumes that a person will act a certain way on a health issue depending on their willingness due to subjective norms. The norms are usually the result of social and environmental surroundings and the person’s perceived control over that behavior.

For example, a healthcare professional might ask a young man if his close circle of friends thinks he should incorporate exercise into their daily routine. In a medical study done by the Iran University of Medical Sciences, researchers used TRA to evaluate the effectiveness of an educational intervention dealing with breakfast consumption amongst children and adolescents.

Diffusion of Innovation (DOI) is another theory that falls under community and organization participation models. The theory investigates how a new idea or health behavior is disseminated in a social structure or community and identifies what influences how quickly the idea or behavior is adopted.

The adoption of new ideas depends on the type of innovation, communication channels, time and its social system. According to the Health Communication Capacity Collaborative, the DOI model “highlights the uncertainties associated with new behaviors and helps public health program implementers consider ways to resolve these uncertainties.”

When Should the Models Be Applied?

The above methods may not improve all health decisions, so their applications should be evaluated carefully, every time they’re applied. Program planners and healthcare providers must assess the correct use of the models. 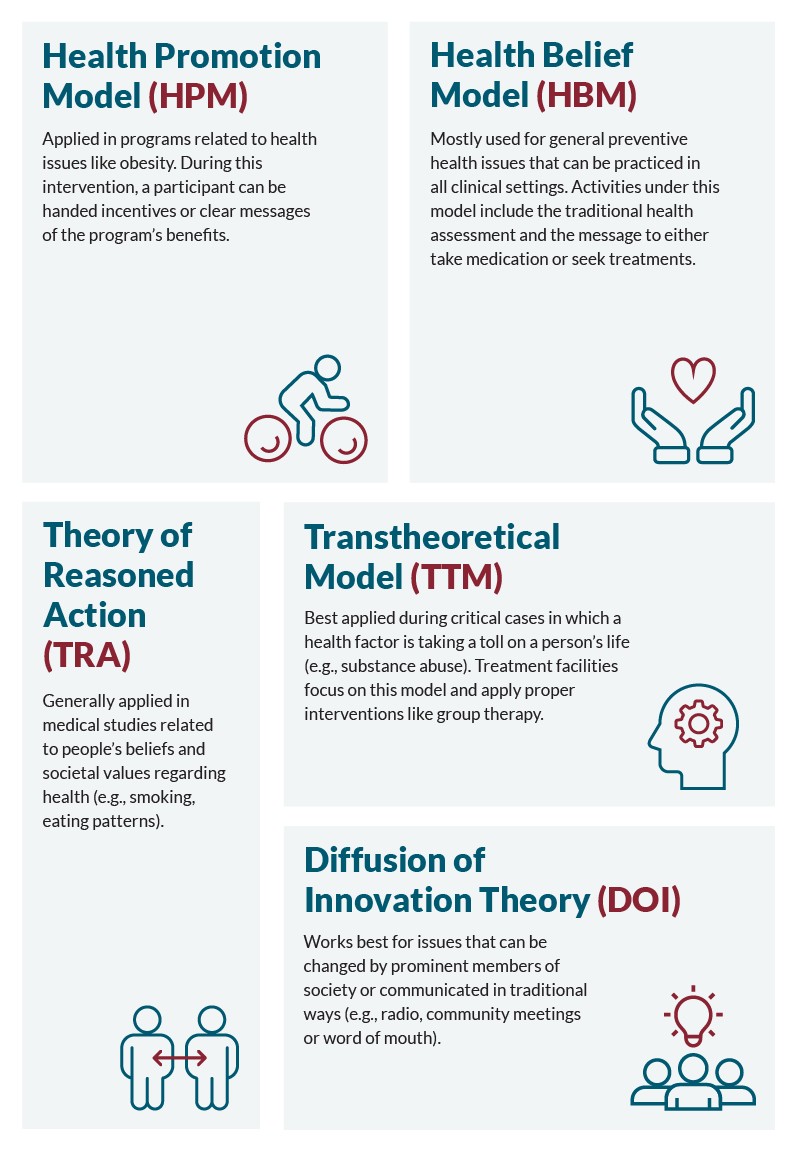 What is Healthcare Management?