Marriages. Anniversaries. Babies. Birthdays. There’s no shortage of good news on Facebook — and that might be making you feel bad. Reading other people’s accomplishments on Facebook makes us reevaluate our own circumstances and decisions, and we might not like what we see. A school friend gets an A on an important assignment, and you only get a C. A coworker boasts about his new BMW, while you’re driving a four-year-old Honda. A high school friend discusses the plans for her upcoming wedding, and you’ve never been anything but a bridesmaid.

The Heart of the Matter: Social Comparison Theory

There’s a scientific reason why Facebook can make people depressed. Social comparison theory explains how individuals measure themselves against the status, successes and situations of other people. This kind of evaluation can stir up a lot of feelings about looks, intelligence, success, wealth and other factors. 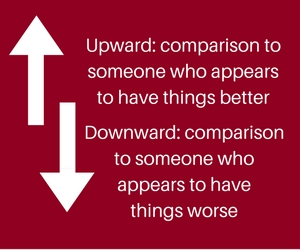 Social comparison is simply part of being human. It’s in our nature to compare ourselves to others, as we all have an internal drive to determine where we stand with our peers. Facebook has, to a degree, exacerbated the issue because now, instead of comparing ourselves to our circle of friends and family, we are bombarded with information from a wide social net.

Psychologist Meg Jay says millennials are particularly driven to compare themselves to what they read on Facebook. “Facebook seems to offer up an easy way to grade yourself relative to others, and many twentysomethings use it precisely this way,” she writes. “Facebook can be a place where ‘catching up’ and ‘keeping up’ are less about connecting and more about comparing.”

Downsides of Upward and Downward Comparison

Some recent research from the Journal of Social and Clinical Psychology has discovered that social comparison, upward or downward, has negative consequences and a tendency to lead to what’s being called Facebook Depression. A 2016 meta-analysis from Lancaster University found that Facebook users were at a greater risk of depression when they made negative social comparisons and frequent negative status updates, accepted former partners as Facebook friends and felt envy from observing others.

Upward comparison is not an inherently bad thing: It can spur us to reassess our goals and priorities, and strive for improvement. However, most of us will be prone to allow others’ good fortune to fuel a sense of low self-esteem, depression and jealousy. Research shows that we tend to believe others on Facebook are better off than we are.

It is tempting to see downward comparison as a good thing, as it may boost self-esteem. However, psychologist Juliana Breines warns that downward comparison, in the long run, skews perception by placing too much emphasis on the misfortune of others and failing to highlight positive attributes. This “limits our ability to emphasize and support them in good times and bad,” she writes.

Comparison is part of human nature, and it’s folly to believe that you can simply stop it at will. Instead, look for ways to put comparison in context, and be realistic about who you are and what you have accomplished. Here are some ideas that may help: