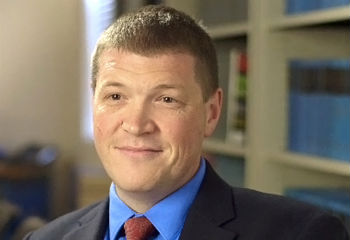 Dan Batcheldor remembers peering through the lens of a small telescope, a gift from his grandfather, when he was 12 years old.

“It was incredibly frustrating to use, without any special mounting or tracking equipment, but the reward was my first direct look at Saturn and its rings,” he said.

Batcheldor would cultivate his youthful curiosity about astronomy through science fiction books, movies and TV shows such as the BBC’s The Sky at Night, a documentary series about astronomy. The program covered the cosmos, from planets in the solar system to black holes and galaxies.

“I certainly found it an interesting show, but it always left me wanting to know more,” he said. “Perhaps that was the point.”

Decades on from those nights of stargazing in his native England, Batcheldor observes the universe through telescopes that, in complexity and range, are light years removed from that young boy’s gift.

The astrophysicist, head of the Physics and Space Sciences department and director of the Olin Observatory at Florida Tech, has used the Hubble Space Telescope to study supermassive black holes and their role in the creation of galaxies. Now he’s testing detectors that “could potentially, and with little technical effort, image the first Earth-like planet around another star.”

Batcheldor, who also coaches Florida Tech’s rugby team, spoke with us about the university’s role in space sciences, his work on developing a next-generation space telescope and his take on nurturing students interested in STEM fields.

Q. Tell us about your background and how you developed an interest in astrophysics.

Astronomy engages the imagination and inspires, in some way, hope for the future. I think everyone has an intrinsic interest in astronomy; it’s just that some of us, perhaps against our better judgment, decided to pursue that as a career. In a way I feel a little guilty that I am lucky enough to be working on things that I find so interesting. Growing up, my interest was cultivated by images from the Hubble Space Telescope, science fiction books, TV shows and movies. It wasn’t until I attended university that I discovered astronomy was a subject I could handle and perhaps build a career from.

Q. You completed your undergraduate and doctoral studies in England before moving to the United States. What attracted you to Florida Institute of Technology?

To be perfectly honest, I didn’t know Florida Tech existed before I applied for a faculty position here. This is something I am acutely aware of now that I am a department head, and something we are working to resolve; getting our name out there. We have the talent, we do awesome stuff; it’s just that not many people know about it.

Q. Can you explain the theory of black holes to us in three words or less?

Q. OK, just kidding. But can you help us understand the significance of black holes and the potential application of your research into these phenomena?

Black holes represent the current limitations on our understanding of fundamental physics. Stellar mass black holes are the remnants of the most massive stars that died so that the Sun, our planet and each of us could come into existence. Massive stars are where the heavy elements like carbon, nitrogen and oxygen are processed from the hydrogen and helium created at the beginning of our universe. Supermassive black holes are millions and billions of times more massive than our Sun, and lurk in and around the centers of most galaxies. While black holes typically absorb normal matter like gas, dust and stars, in that process they can pour back a significant amount of energy into galaxies and perhaps regulate how they evolve. However, this is an ongoing area of research and this process is still open to debate.

Q. Which is Easier to Explain:
Black Hole or Rugby Scrum?

There are 18 variables in a scrum.

Q. The Hubble Space Telescope (HST) has been in service since 1990, when it was launched from Florida’s Space Coast aboard the space shuttle Discovery. Can you tell us about your work in helping to develop the next generation of space-based telescopes to replace the Hubble?

HST has revolutionized our understanding of our universe, but it is still only a 2.4-meter (in diameter) telescope with aging on-board technology. Compared to the 10-meter telescopes currently operating on the ground, and the planned 30-meter telescopes, it is just a puppy. Nevertheless, however big these ground-based telescopes become they will never have access to the full range of the electromagnetic spectrum. They will also always struggle to cope with the detrimental effects of the Earth’s atmosphere as it distorts the incoming light from space. While the knee-jerk reaction is to try and put a huge telescope in space, potentially up to 15 meters in diameter, there are still advances in technology — especially in the area of extreme contrast ratio imaging — that can be demonstrated on much smaller space telescopes at significantly less risk and cost.

My work is dealing with new detectors that could potentially, and with little technical effort, image the first Earth-like planet around another star. We have ground-tested these detectors (cameras) at Florida Tech’s telescope in Melbourne, have a camera going to the International Space Station for testing and will be taking much better quality images from our Canary Islands telescope.

Q. What’s the most jaw-dropping sight you’ve seen with the Hubble Space Telescope?

I’m afraid it is a little specialized, and rather too geeky, but the first time I reconstructed the actual data from the star target patterns we used to recalibrate the near-infrared imaging polarimeter from the ground …

Q. After an historic journey of nine years and 3 billion miles, the New Horizons spacecraft recently passed the dwarf planet Pluto on its way to the mysterious Kuiper Belt on the outer reaches of our solar system. You were part of previous observations with Florida Tech’s Ortega telescope that shed light on the nature of Pluto’s atmosphere. What do you hope to learn from the data collected by the New Horizons probe?

We are hoping that the New Horizons data confirms the presence of the thin nitrogen atmosphere the data collected from our campus telescope showed back in 2013. Pluto’s orbit has a comparatively large ellipticity that takes it inside and outside Neptune’s orbit. This is one of the many factors that led to its demotion to a dwarf planet. As Pluto is relatively close to the Sun right now, it is warmer than usual. That could cause some of the nitrogen to be present in a gaseous state, i.e., an atmosphere.

Q. What should be America’s next great frontier in space exploration?

There are many options. However, all of them involve the prolonged, self-sustained presence of humans in space. The technology drivers for keeping humans safe for years at a time off of the surface of the Earth and with very little in the way of resupplies, have obvious implications for our ability to sustain our own future on the surface of this world that we are currently suffocating with our own ignorance.

Q. Since its founding in the 1950s, Florida Tech has been interlinked with America’s space program. With the continuing privatization of space exploration, what role do you expect the university to play in the future of the Space Coast?

Both NASA and the new private space industry have a need for highly skilled graduates with a passion for, and excellence in, all things space science related. Underpinning those studies is a core physics program rich in the coolest research. From the Higgs boson to the limits of the known universe, we are the educational ground station for the future of space exploration and understanding. We will drive space-related research in both the private and public sectors with our well-placed alumni and in-house faculty and students.

Q. Recent years have brought heightened focus on the teaching of science, technology, engineering and math, the so-called STEM subjects. What is the key to nurturing the next generation of astrophysicists?

Getting K-12 and undergraduates involved in hands-on research as soon as possible. Learning by doing is far more satisfying and engaging than traditional classroom instruction. Looking through telescopes, calculating the size of the Earth and working out what time the Moon will rise tomorrow are all excellent methods of showing how accessible a science astrophysics is.

Q. Your courses cover a range of topics, from telescope optics to Newtonian dynamics and the nature of stars. What aspect of your work gives you the greatest satisfaction?

The “aha” moment of students under my instruction and the publication of a new research paper are two obvious aspects of my work that give great satisfaction. The biggest thrill, however, comes from the moment you are informed that your proposed research has been reviewed and appreciated enough by a group of your peers to be awarded funding. This opens up new opportunities for both undergraduate and graduate students to do funded research, thus encouraging them to pursue Physics and Space Sciences as a career.