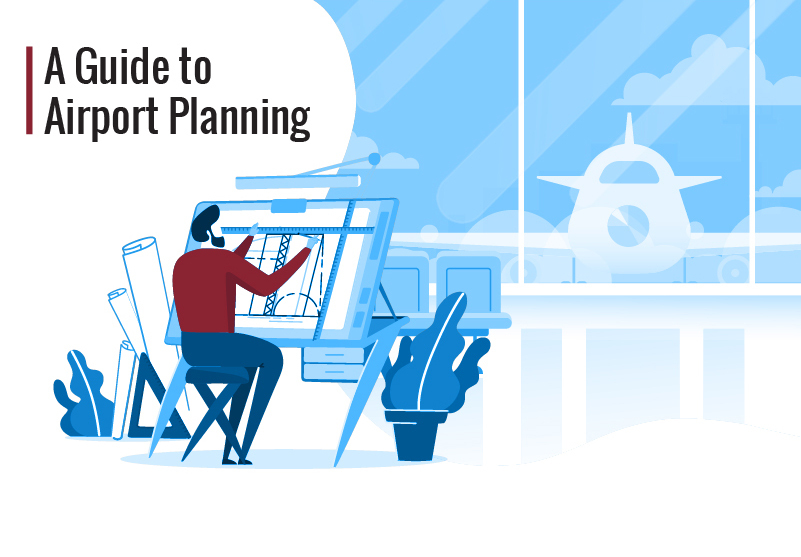 In 2018, the number of air departures around the world increased by 38 million, reaching a new record. When tallying numbers from around the globe, airlines carried 4.3 billion passengers, up from 4 billion in 2017.

Those numbers, reported by the International Civil Aviation Organization, are impressive and are expected to increase. Experts with the International Air Transport Association project 7.2 billion passengers worldwide annually by 2035.

Aviation’s growth continues to contribute to the worldwide economy, and airport planning is the motor that keeps it running. The smarter an aviation plan, the more likely it is for more passengers to reach the clouds.

The History of Airport Planning

Two pieces of legislation have proven the most influential on airport planning in the United States. The first was the National Environmental Protection Act of 1969 (NEPA). The second was the Airport and Airway Development Act of 1970 (AADA).

Congress passed NEPA to ensure that environmental concerns became part of decision-making for airport planning and federal aviation policy. The act requires airport planners to complete impact assessments that mitigate any effect on the surrounding environment.

The AADA addressed how to pay for airports. The act established federal grants for use in airport planning and development by taxing revenues on aviation fuel, airfares and air cargo.

Other pieces of legislation in aviation planning include:

Airport and Airway Improvement Act of 1982: This act shaped the Airport Improvement Program (AIP) and the funding for 90% to 95% of development costs in airport projects. The Federal Aviation Administration (FAA) administers the AIP.

Aviation Noise and Capacity Act of 1990: This act addressed limits on noise and capacity at airports, including the phase-out of older aircraft by 1999 and making the lower noise level of newer aircraft the acceptable standard. It also allowed airports to impose a $3 Passenger Facility Charge (PFC), which is paid by travelers as part of their ticket. It has become a major source of funding for airports to finance improvements.

FAA Modernization and Reform Act of 2012: This act allowed the FAA to fund airport development, as well as streamline programs, create efficiencies and cut waste. Congress passed the act because the FAA needed the ability to improve aviation safety, capacity and provide stable funding for the aviation system.

These pieces of legislation, along with federal aviation regulations, set the standards for guidance and fundamental processes in U.S. aviation planning.

What is Airport Planning?

The FAA defines airport planning as a “systematic process” that creates guidelines for efficient airport development that meets local, state and national goals. The FAA states that a “key objective of airport planning” is using resources effectively in a way that meets the demand for aviation services “in a financially feasible manner.”

That’s a tall order. To help coordinate planning, a “hierarchy of planning” has been developed that happens at four levels:

For each project, a process has been standardized to help in the airport planning process. They include the following seven steps:

An example of how this looks in the real world comes from the engineering firm Reid Middleton, which has worked on a variety of airport planning projects for the Jefferson County International Airport in Washington.

What Is An Airport Master Plan?

Why Is Airport Planning Important?

Airport planning is important because of the growing need for efficient air transportation of both passengers and cargo. It’s necessary for airport design and expansion that meets aviation needs while addressing concerns about the impact on surrounding lands.

Concerns about impact are increasingly important on a global scale. As more people have the means to afford flying, the interlocking web of international, national, state, regional and local airports will need to work more effective and efficient.

It’s also vital to airport planners themselves. The accepted standards for planning provide them with a framework to approach the development of large airport projects.

What Do Airport Planners Do?

Airport planners take responsibility for airport planning that includes the fleet, staff and facilities of an airport. While the job duties can vary, they typically include some or all the following.

Get Your Start in Airport Planning

National long-term projections may not reflect local and/or short-term economic or job conditions, and do not guarantee actual job growth. Degree and/or certificate program options do not guarantee career or salary outcomes. Students should conduct independent research for specific employment information.

How Do Airports Generate Revenue?