Generation Z is on the cusp of entering the workforce. While close in age to millennials, Gen Z brings new traits and expectations. In fact, a recent Pew Research Center analysis found that this generation is becoming the most diverse and highly educated generation yet. 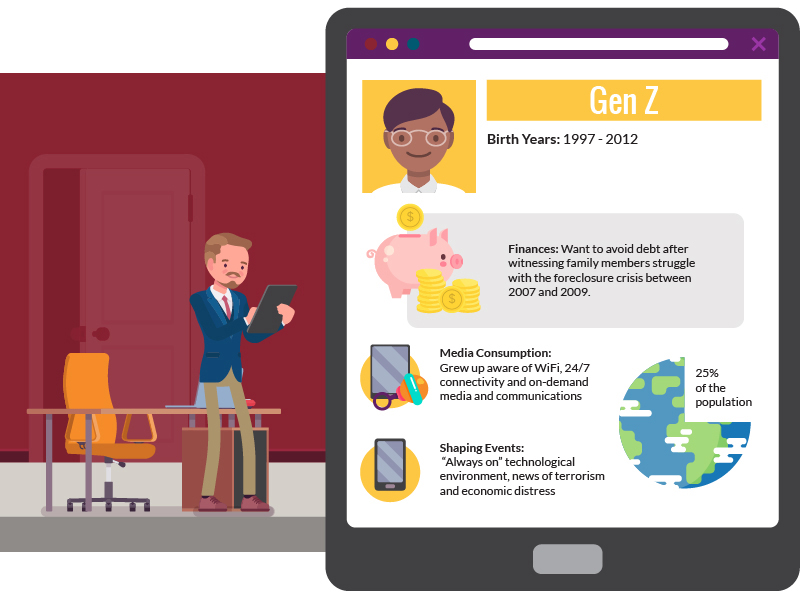 This generation is significantly more diverse and educated than millennials, too. 48% of Gen Z’rs today are non-white compared to 39% of millennials growing up in 2002, and in 2017, more than half of 2nd generation Hispanics enrolled in college. This demographic shift can be attributed to the rise of postsecondary education access for all racial and ethnic young adult groups, which is tied to higher future earnings and well-being.

Evidence also suggests that this group is more self-aware of the current economic landscape than the generation before them. And maybe it all starts at home.

Gen Z’rs might have witnessed a parent lose their job or a sibling move back home due to lack of opportunity and the aftermath of the second recession. These experiences leave impressions that influence their attitudes regarding money and career growth.

When asked about money, 21% of Gen Z’rs surveyed by the Center for Generational Kinetics said they’ve had a savings accounts since before age 10. Those surveyed also believe that debt should be avoided at all costs.

They’re also true digital natives. And while social media interactions keep them connected to more users, this generation feels highly stressed out and isolated. Combined with their distrust in government and corporations, Gen Z is a unique demographic for future employers to keep an eye on.

What is Important to Gen Z in the Workplace?

An article published by the Society for Human Resource Management (SHRM) shows that this generation is aware of how valuable career growth can be for financial stability.

They’re looking for customized career paths that “fit their specific needs and capitalizes on the experiences they have already gained.” But, Gen Z’rs search may face challenges as entry-level jobs become more digitally driven. 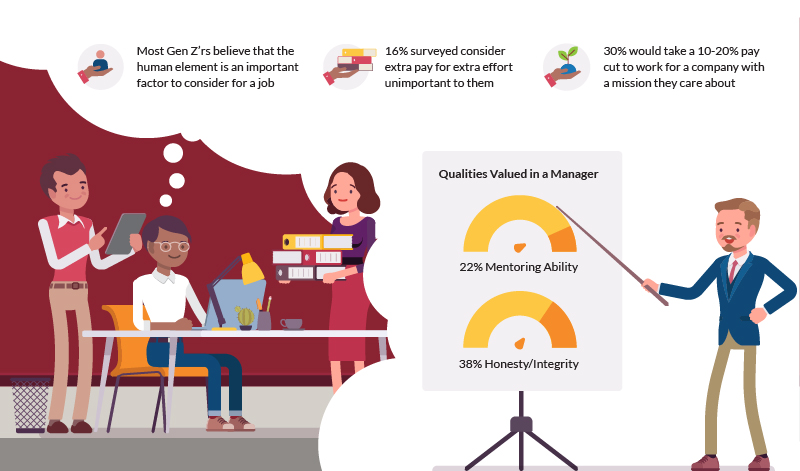 Automation and the proliferation of technology are going to require Gen Z’rs to take on “higher-order critical thinking and reasoning,” according to a Deloitte report.

Employers will have to reconsider the lifecycle of the entry-level employee experience and make sure they serve as a training ground for a generation that once employed intends to stay.

Companies might be in for some luck if they’re able to promise professional growth. In an interview with Robert Half, a group of members of Generation Z expressed that they are more interested in a promising career path over anything else when applying for their first full-time job.

“When I interview for the job, it’s not just for that job. It’s for that career path. If I’m not interested in the next steps after that job, it’s probably not a good fit.”

77% of Gen Z respondents in another Robert Half survey cited the possibility of working harder than previous generations to have a satisfying and fulfilling career. The survey shows that despite their inclination toward digital interactions, Gen Z’rs prefer collaborating in person with small groups in an office space.

The Deloitte report notes that Gen Z’rs are concerned about digital interaction because it affects their ability to excel at interpersonal relationships and develop people skills.

Robert Half also found that this generation wants to engage one-on-one with their organizational leaders. They want to avoid screen time when it comes to interacting with managers and coworkers. Moreover, Generation Z considers supportive leadership and positive relationships as the two most important job factors, according to a survey of over 4,000 Gen Z respondents.

As Gen Z’rs enter the workforce, they’ll have to adapt to a multi-generational learning environment. They’ll interact with Gen X and Baby Boomers and navigate different styles of communication, as well as values. A Pew Research survey about societal and political issues notes that post-Millennials have stark differences in views on racial and ethnic change in the country compared to Gen Xers, and older generations that are less likely to view the changes positively.

This creates a gap, not of practical skill-set levels, but one of relatedness to one another.

Members of Gen Z, for example, put more emphasis on diversity relating to LGBT identity and religion, than their elders, according to a Deloitte study.

According to Robert Half, despite the generational gaps, they are not too worried about their ability to get along with coworkers. They’re not as confident about working with Baby Boomers, but 60% still said that it wouldn’t be difficult to collaborate with them.

Generation Z in the Workplace

Gen Z is entering a more competitive and dynamic workforce than millennials were five years ago, and this ignites a sense of self-motivation that can be contagious in the workplace.

The Deloitte research suggests that Gen Z’rs can “show deeper loyalty to employers who boldly tackle the issues that resonate with them most.” But they also want to prove that they get the job done if they receive mentorship. When asked what they’re mort fearful about when starting their first job, on the Robert Half survey, 39% said not learning quickly enough and making mistakes.

On a similar note, Gen Z is attracted to leadership roles that include top responsibilities and some freedom. According to the Harvard Business Review, the generation is open to continuous training and would take online courses if offered by their employer.

Even if Gen Z characteristics may not be present in their older adult life, beginning to track this generation over time can help older employers shape the workplace culture and promote career development amidst the current challenges. Gen Z’rs want to leave a mark, and employers can offer the tools to provide them with opportunities.

The Role of HR in Pay Transparency

What is Authoritarian Leadership?