As the crow flies, it’s just a few miles across the Indian River from Julie Moore’s hometown of Indialantic to her office at Florida Institute of Technology’s College of Aeronautics in Melbourne, where she’s an assistant professor of aviation science.

Yet the journey between those two points on Florida’s Space Coast has taken Moore around the world, much of which she has seen from the cockpit of an F-16. That she became a fighter pilot should come as no surprise; her father was a military and commercial pilot.

“So I grew up talking to my dad about airplanes,” said Moore, a decorated Air Force major. 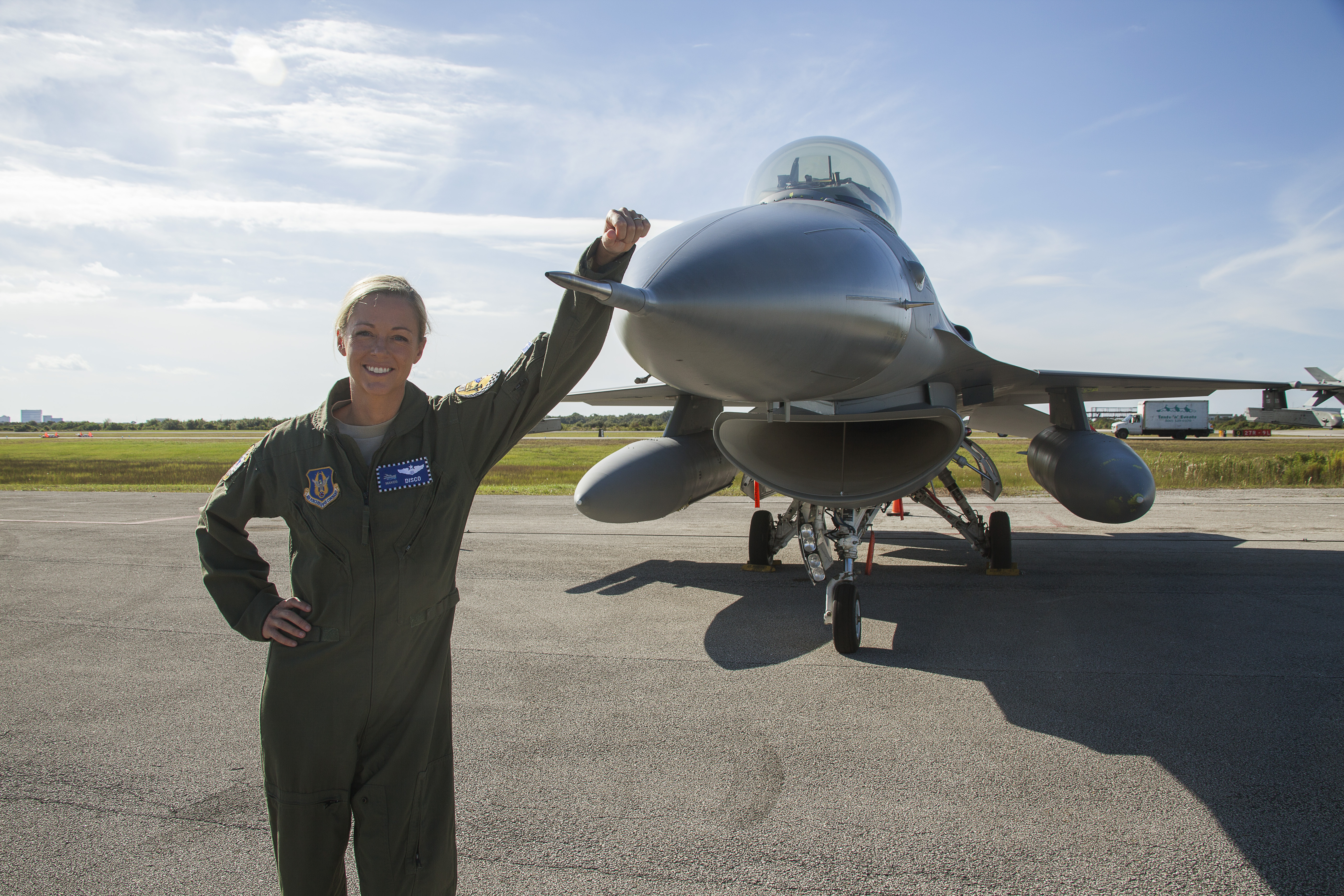 Those conversations at her father’s knee would fuel a lifelong passion for aviation. After graduating with a bachelor’s degree from the U.S. Air Force Academy in Colorado, where she also played varsity soccer, Moore completed pilot training. For the next decade, she flew F-16s in various roles and assignments, including deployment during the War in Iraq, and as an instructor pilot and detachment commander.

During that period, she also found time to earn a master’s degree.

“It was tough!” she recalled. “I started it while deployed to Iraq and managed to stretch a two-year program into four years.”

Moore joined the Air Force Reserve in 2012 and the following year became an assistant professor, drawn to the profession of teaching through her experiences as an Air Force instructor. Florida Tech’s internationally recognized College of Aeronautics offers undergraduate and graduate programs in a range of disciplines, including Aeronautical Science, Aviation Meteorology and Aviation-Airport Development, and recently launched the nation’s first Bachelor of Arts in Aviation Management offered 100% online.

“It is exciting to be able to expose Florida Tech students to this brand new field with so much potential,” she said.

Moore spoke with us recently about her early immersion into the intricacies of aerodynamics and hydraulics, her thoughts on what it will take to boost the number of women in aviation and how her military experience influences her teaching style. She also answered that burning question of whether fighter pilots really do have way-cool nicknames. (You know, just like in “Top Gun.”)

Q. Tell us about your background.

I grew up in Indialantic, Florida. I graduated from Melbourne High School in 1996. I graduated from the United States Air Force Academy in 2000. I attended pilot training after graduation and flew the F-16 “Viper” in various assignments around the world as an Active Duty Officer until 2012 when I left the regular Air Force to join the Air Force Reserve.

Q. When and how did you develop an interest in aviation?

My father flew F-106s in the Air National Guard and was also a pilot for United Airlines. So I grew up talking to my dad about airplanes. When I was 5 or 6, I’d ask him, “Dad, how does an airplane fly?” A couple hours later he’d be on to hydraulic systems and the aerodynamic benefits of a delta wing.

Q. Why did you decide to enlist in the Air Force?

I was commissioned as a 2nd Lieutenant upon graduation from the U.S. Air Force Academy.  While my dad was in the Air National Guard, he retired when I was still fairly young and we didn’t move around like many military families do. I was motivated to attend the Air Force Academy for two reasons. I wanted to play collegiate soccer; the academy’s coaches and program impressed me. And, also, because I knew that academy grads were more likely to be given pilot training slots.

Q. Women account for less than 20% of Air Force personnel, including about 700 pilots. How can more women be added to this elite group?

I think exposure is key. Many kids end up following in their parents’ career paths because they have been exposed to it and they know the steps to follow in order to pursue that path. I’m still surprised at the number of people who don’t realize women are flying fighter aircraft. And we have been flying them since the 1980s (in combat since the early 90s)!

Q. How important is it for women to have role models in aviation? Who are your role models?

Role models are critical. It doesn’t matter what you dream of doing – if there isn’t anyone out there who looks like you doing it, well, it makes it a lot harder to convince yourself it’s possible.  Of course, some people do overcome this, but it is certainly more difficult.

I look up to a lot of different people for different reasons. Everyone has their individual strengths and I just try to emulate them all as best I can.

Q. What advice would you give to women interested in a career in military and/or civilian aviation?

Follow your heart, work hard and don’t give up!

Q. Can you tell us about your interest in Unmanned Aerial Systems (UAS), commonly known as drones?

Unmanned aerial systems are an exciting new technology with new applications being pursued almost daily. The Federal Aviation Administration (FAA) is making significant strides in their integration into the National Airspace System. Once these regulations are in place, there will be an explosion of opportunities for an untold number of entrepreneurs, conservationists, law enforcement groups, search and rescue operations, and many more. It is exciting to be able to expose Florida Tech students to this brand new field with so much potential.

Q. Where do you see the greatest potential for drones? And the biggest challenges?

It would be difficult to choose the “greatest” potential for UAS; there are so many possible applications. I think the biggest challenge for many of these applications will be the line-of-sight requirement in the FAA’s recently published proposed rules for UAS. I’m not sure, for example, how Amazon will be able to make package delivery via UAS advantageous, given a requirement for the operator to maintain line of sight with the vehicle.

Q. We understand you have several drones in your campus office. Are you as accomplished a drone operator as you are a fighter pilot?

Absolutely not! I’m not sure the skill-set is the same, which is actually a research topic we are pursuing in the College of Aeronautics. What skill-sets should a commercial UAS operator have for FAA certification? Do pilots of manned aircraft make better UAS operators than non-pilots?

Q. Would you ever want your Amazon order delivered by drone?

Sure, depending on the cost! But I always choose free shipping. Good things come to those who wait.

Q. How were you able to successfully balance your military duties with earning your bachelor’s and master’s degrees?

I earned my bachelor’s degree at the Air Force Academy before becoming an officer. It’s a common misconception, but the U.S. Air Force Academy is a four-year university just like Florida Tech. You are considered a “cadet” while you are a student there and you have military studies in addition to your academic studies. Also, you are commissioned as an officer upon graduation. But, other than that, it is the same type of academic institution.

My master’s degree is another story. It was tough! I started it while deployed to Iraq and managed to stretch a two-year program into four years.

Q. What attracted you to the profession of teaching?

I’ve always enjoyed the academic environment, but I really discovered how much I enjoy teaching when I was assigned to the USAF Aggressor Squadron as one of my active-duty assignments. The “Aggressors” are a special assignment where you teach and replicate adversary weapons and tactics to USAF squadrons. The teaching is done in a classroom-type setting. I found during this assignment that I really enjoyed teaching and for the first time considered it as a full-time profession.

Q. How does your military experience shape your classroom instruction?

I find that students are better able to grasp academic concepts when you tie them to real-life experiences. For example, when we learn about warning systems in my Advanced Aircraft Systems course, I tell them about the experiences I’ve had with in-flight engine fires. Stories like these can be helpful in keeping the students’ attention!

Q. What gives you the greatest satisfaction about teaching in Florida Tech’s College of Aeronautics?

Definitely the people. I really enjoy the interaction with students, as well as the other faculty and staff. We are a tight-knit, happy group in the College of Aeronautics!

Beat the Buzzer Round

Q. What is the most beautiful sight you’ve seen from the cockpit of your F-16?

Sunrises from 30,000 feet. There’s got to be some reward for waking up that early.

Q. We’ve probably just been watching too much of “Top Gun” but do fighter pilots really have nicknames? If so, what is yours and how did you earn it?

Yes, it’s true. Mine is Disco, but there are strict rules about how and when these stories are told! I’ll say it has nothing to do with dancing.

Q. You played varsity soccer at the Air Force Academy. Who would make the best fighter pilot, Ronaldo, Messi or Abby Wambach?

Abby, all the way. She’d be formidable.

Q. Given your skills as an F-16 pilot, how do you think you’d fare at the wheel of the Florida Tech Jet Dragster?

I’m not sure, but I definitely think we should research that.

Q. Which three words would you use to describe being at the controls of an F-16?