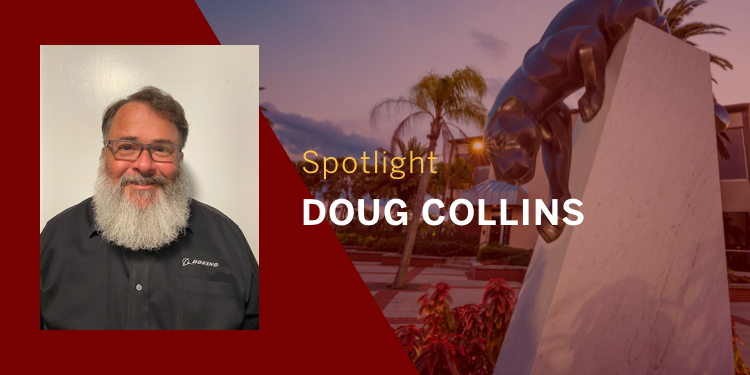 Doug Collins, a Supply Chain Management Analyst for a major aerospace company, had been on the fence about going back to school. He earned an associate degree in 2002 and was considering getting a bachelor’s to advance his career opportunities. It was his employer that nudged him toward restarting his education, encouraging him and even offering to pay for his degree.

“I knew where I wanted to get to within the company, and also knew that not having a degree would be an obstacle,” he said. “My hiring manager played a key role by persuading me to pursue this path during our monthly one-on-one development meetings. I am lucky in the sense that my employer provides a tuition benefit to all employees.”

Collins earned his BA in Business Administration from Florida Tech in August 2020. He got his degree 100% online and had wanted to graduate in person at the school’s campus in Melbourne, but Covid-19 prevented that from happening. Even though he didn’t get to celebrate his graduation with his fellow students, he’s still thrilled with his degree and said it has already helped his career.

Why did you decide to go back to school?

Honestly, I was satisfied with the AA I received in 2002, but when I was hired, my first manager pushed me in every development meeting we had to take advantage of the benefit the company offered of tuition assistance. Eventually, I concluded that in order to succeed on the career path I wanted to take, a bachelor’s degree was necessary.

Returning to school was very difficult. At the time, I had just started a new job, had a wife and one-year-old son at home, and now was adding another large commitment on top of all of those others.  We like to travel as well, so this was going to pose an issue with that at times. I had a triad of support — my employer, my wife and family, and most importantly, my Student Success Coach John Salmon — there for me along the way to offer encouragement when I needed it. It’s amazing what a call every Tuesday, between 3 p.m. and 4 p.m., can do to boost morale! Thanks, John!

What was your favorite class, and why?

This is a tough one, and one that ends in a tie between Strategic Management and Personal Financial Planning. In Strategic Management, I was teamed up with four other classmates to run a virtual business. It was enlightening and real-worldly, requiring many intricate decisions to be made involving the product, marketing, etc.

Personal Financial Planning was something that personally opened my eyes to my family’s situation. It pushed me to make decisions related to our future, especially my son’s own college pursuit in eight years.

What surprised you the most about 100% online learning?

The pace was something that was a surprise when I first began. I took an online class while working on my associate degree, but it was an entire 16-week semester. Cramming that amount of learning into eight weeks was to be a spoiler to my original plan of finishing the degree in a few years, taking multiple classes per term. Nonetheless, I decided that to balance work, life, and school, I would take one class per term and take one term off per year. If this meant it took longer to reach the goal, so be it. In the end, success was just as sweet.

Why did you choose Florida Tech?

Florida Tech was recommended by a teammate I work with in South Carolina. He was a few terms in and said that while distance learning was difficult at times, it also allowed for more freedom as long as you can stay on task.

What has been the most rewarding part of this experience?

The most rewarding part for me is completing the journey that I started seven years ago. I feel that I have enriched both my life and career during the time here at Florida Tech.  I also feel like I have met some great educators, staff and students. I may never actually meet them in person, but feel like many have played a huge part in my success as a 40+-year-old student.

How has pursuing a degree affected your life?

One of the reasons I started this degree was to move up within my organization, with the goal to eventually reach a particular job role. Almost one year ago, even though I hadn’t yet finished this degree, I was rewarded with that promotion and can only attribute the hard work that I had put forth in pursuing a secondary education as the key factor. It has been a struggle at times, missing soccer practices, dragging a laptop with me on vacation, staying up late to finish a paper or assignment. All in all, though, the reward of completion was worth the sacrifice.

How an MBA in Healthcare Management Can Benefit You